What is Co-generation (COGEN)?

COGEN is a process where you can generate two forms of energy, electricity and heat, from a single fuel source. The basic idea is to burn Natural Gas to drive a co-generation engine (a small jet engine) which provides the torque to spin a generator which produces the electricity. Co-generation occurs when you capture and reuse the engine’s exhaust waste heat (exiting at 535o F) to assist with space heating for buildings, hot water heating, pool and spa heating, absorption cooling, steam production and centralized heating/cooling. 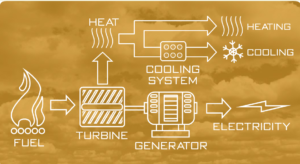 What is a Heat Exchanger?

A heat exchanger is a specialized device that assists in the transfer of heat from one fluid to the other. In some cases, a solid wall may separate the fluids and prevent them from mixing. In the most efficient heat exchangers, the surface area of the wall between the fluids is maximized while simultaneously minimizing the fluid flow resistance. Fins or corrugations are sometimes used with the wall in order to increase the surface area and to induce turbulence. Perhaps the most commonly known heat exchanger is a car radiator, which cools the hot radiator fluid by taking advantage of airflow over the surface of the radiator.In the case of co-generation engines, the energy from exhaust waste heat is transferred to assist with space heating, hot water heating, steam production, chemical processing, and cooling with absorption chillers.

What is an Absorption Chiller?

The waste heat vaporizes a chemical in a vacuum into a gaseous state. The gas cools when it expands into the gaseous state and is then routed through a heat exchanger as a refrigerant. The refrigerant then cools the fluid that is used in a cooling cycle.

The two most common refrigerant/ absorbent mixtures used in absorption chillers are water/lithium bromide and ammonia/water.

Absorption Chiller/Refrigeration – An absorption chiller is a transfer heat device which uses the co-generation engine waste heat to drive the cooling process.

Can COGEN help me generate my own power?

A Natural Gas fired Co-generation system will enable you to generate your own on-site power and operate off the utility power grid. It allows you to operate as a stand-alone system, and use utility power only when it is needed.

COGEN can self-start without outside power and load follow your power demand needs as they fluctuate during the day. If your demand exceeds the COGEN system capacity, it will switch in the parallel use of utility power (seamlessly) to meet the excess demand.

During major grid failures, COGEN can continue to operate up to its maximum design capacity. For example, over 30 hospitals with COGEN continued routine operations during the August 2003 California power blackout.

Where the grid is at or near capacity, COGEN will reduce the grid’s load, thus increasing grid reliability and homeland security.

Will COGEN generate power at a lower cost than the utility rates?

The gas price vs. electric rate is known as the “Sparks Spread”. The cost of Natural Gas has dropped dramatically (by 66%) in the past 4 years. This has made the use of Natural Gas co-generation systems to generate electricity very cost competitive.

What Kind of Savings Will COGEN Generate?

Savings Are Substantial. Assuming a minimum threshold of energy consumption and energy costs that justifies the capital expenditure, COGEN can generate savings from 50% to 60% of current operating costs. A recent typical client example is as follows:

Will COGEN qualify for any financial incentives?

COGEN will qualify for the following financial incentives for a cash purchase:

Will COGEN help me reduce the annual inflationary cost of generating electricity?

The availability of Natural Gas has increased to a level where the US NG energy supply is double that of Saudi Arabia’s entire oil supply. The NG cost is projected to inflate at a lower rate than fossil fuels through 2035. See Figure 2. This will control COGEN’s inflation rates well below the average utility annual rate increases. COGEN may average 3.0% or less, versus the actual utility annual increases of 4% to 6% over the last decade. 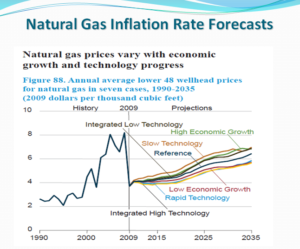 Is the COGEN system more efficient than utility power?

COGEN will increase your overall system efficiency from 50% to 80%.

Conventional power plants burn fossil fuel to produce steam which drives a turbine to create electricity. Only one-third of the fossil fuel is converted to electricity. Two-thirds goes up the smokestack as heat. The transmission and distribution losses further reduce the delivery of electricity to your business. The delivered power is then used at your plant to generate electricity at an efficiency of 50%.

What payback can I expect on a COGEN investment?

A cash purchase payback can range from 2 to 6 years depending on your current utility rate per KWH, total KWH used and use of the co-generation waste heat. Here are some examples:

Is there flexibility in how you can operate the COGEN Units?

A unique feature of COGEN is the ability to stack the units. If your power needs are 200KW to 1MW, it is possible to stack one to five of the 200KW units to meet your needs.

In addition, the stack ability allows you to run only as many units as are needed at any time. For example, if you need only 600 KW of the 1 MW, you can operate all units at 60% capacity, or just 3 at full capacity and leave the other 2 units idle.

Will COGEN reduce my carbon footprint?

The co-generation systems are CARB certified and will reduce your carbon emissions. COGEN will significantly reduce pollutant emissions such as Nitrogen Oxide, Sulphur Dioxide and Carbon Dioxide. It reduces emissions by 45% when compared to conventional centralized power plants. It will also reduce CO2 emissions at half the cost of Solar

Will COGEN help me with comply with AB32?

AB32 will impose carbon emissions penalties on the generation of electricity (beginning in 2013) and heat (beginning in 2015). Because the micro-turbines are CARB certified it will reduce the CO2 impact for both penalties.

How maintainable is the COGEN equipment?

10 Year Maintenance Warranty. Because of the co-generation engine’s high reliability, COGEN suppliers will typically offer a 10 year maintenance free bumper to bumper warranty as part of the purchase price.

This includes all scheduled and unscheduled maintenance, parts and labor at a single rate based on system run hours. There are no hidden costs.

A cyber-link connection allows for the immediate remote monitoring and troubleshooting of problems. Site visits are provided on same day/next day service, and an on call basis for weekend emergency service.

How much space is needed to install the COGEN equipment?

A single 200KW module is about 6 foot tall, 3 foot wide, 3 foot deep (about the size of a large double refrigerator) and can be installed within a footprint of one car parking space.

How noisy is the COGEN equipment?

COGEN is Quiet. The co-generation noise level is equal to that of a noisy dishwasher. It can also be housed in a sound-attenuated enclosure to meet local city permit db level requirements.